Training overparameterized convolutional neural networks (CNNs) with gradient-based methods have been the de-facto method for learning good representations of images for tasks such as recognition, object detection, and segmentation. There has been a great success in this space, with deeper and wider models achieving state-of-art results [1,2,3]. One of the primary reasons that CNNs have done so well is because of the inherent inductive bias these models encode.

Before we can talk about inductive biases, let's think about weight reuse and sharing in common deep learning building blocks.

We see that Fully connected layers, have all independent weights and there is no sharing. Convolutional layers have local kernel functions, which are reused multiple times across the input. Recurrent layers reuse the same function across different processing steps.

Inductive bias can be thought of as an equivalent of weight sharing. An inductive bias allows a learning algorithm to prioritize one solution or interpretation over another, independent of the observed data.

For example, in a Bayesian model, the inductive bias is typically expressed through the choice and parameterization of the prior distribution. In other contexts, an inductive bias might be a regularization term added to avoid overfitting, or it might be encoded in the architecture of the algorithm itself.

So what inductive bias do these building blocks end up encoding? Let's have a peak

And it is this very translation equivariance and locality that have allowed for the great success of CNNs.

Self-attention based architectures, in particular, Transformers[6] have become the model of choice in natural language processing. The dominant approach is to pre-train on a large text corpus and then fine-tune on a smaller task-specific dataset[7]. The building blocks of these transformers are computationally efficient and scalable, with recent models scaling up to 200B [8] and 600B [9] parameters. 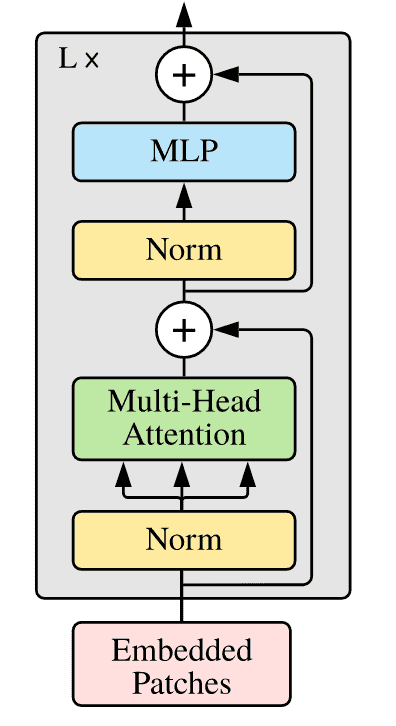 Inspired by the success here, there have been attempts to combine CNN-like architectures with self-attention [10,11], with some replacing convolutions entirely [12,13]. The latter models, while theoretically efficient, have not yet been scaled effectively on modern hardware accelerators due to the use of specialized attention patterns. And hence, CNNs remain the architecture of choice for the image space.

ICRL 2021 saw a large number of submissions, one of which has caught everyone's eye is the Vision Transformer (ViT) [14]. The paper showed the first highly successful model which can use the vanilla transformer model, without any special adaptation of self-attention for the image recognition problem. The model is visualized in the image below. 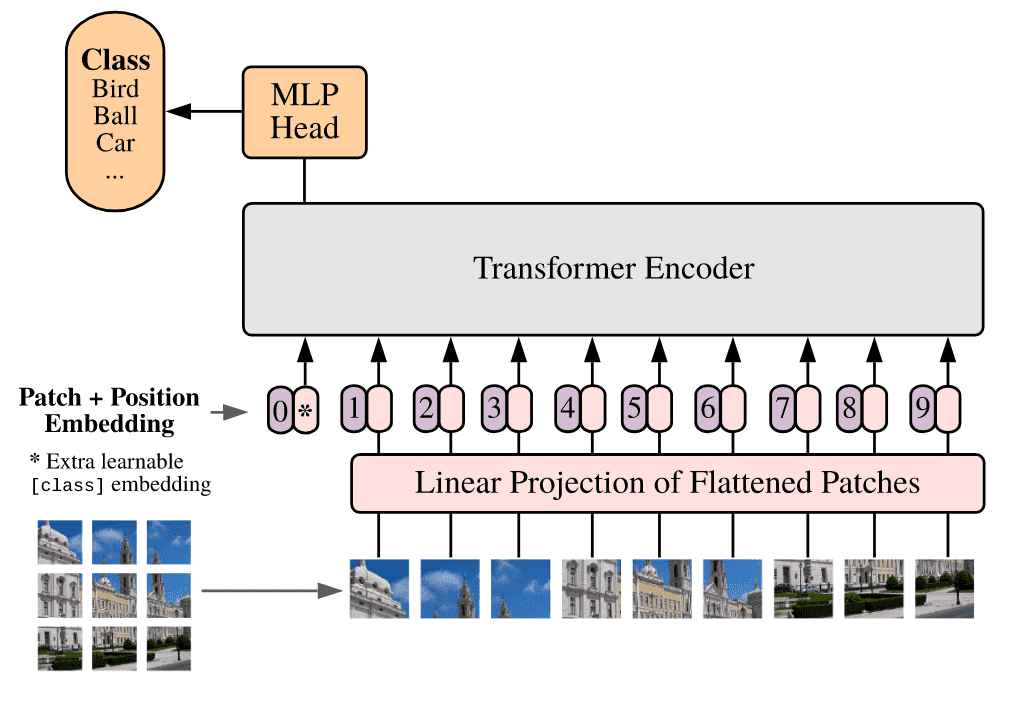 To handle 2D images, the vision transformer (ViT) reshapes an image x∈RH×W×C into a sequence of flattened 2D patches xp​∈RN×(P2.C). Here (H,W) is the resolution of the original image, and (P,P) is the resolution of each image patch. N=HW/P2 is then the effective sequence length for the transformer. The Transformer uses constant widths through all of its layers, so a trainable linear projection maps each vectorized patch to the model dimension D, the output of which we refer to as the patch embeddings.

Similar to BERT's [class] token[7], a learnable embedding is prepended to the sequence of embedded patches z00​=xclass​, whose state at the output of the Transformer encoder z0L​ serves as the image representation y. Both during pre-training and fine-tuning, the classification head is attached to z0L​. Position embeddings are added to the patch embeddings to retain positional information.

ViT is generally pre-trained on large datasets and fine-tuned to (smaller) downstream tasks. The pre-trained prediction head is removed and a zero-initialized D×K feedforward layer, where K is the number of downstream classes, is attached. [3,15] showed that it is beneficial to fine-tune at higher resolutions. Patch sizes are kept the same, resulting in longer sequence lengths. The pre-trained position embeddings are 2D interpolated, according to their location in the original image. This resolution adjustment and patch extraction are the only two inductive biases that are manually injected into the model.

As with most transformer models, one can tune multiple parameters to scale the model[16]. The paper proposed three qualitatively different configurations and they experimented with multiple variations of these.

The Good, The Bad and the Ugly

The model when pre-trained on JFT-300M[17] and then fine-tuned for tasks such as CIFAR10, ImageNet, ImageNet-ReaL[18] and VTAB[19] performed well. It improved state-of-art results in some cases and was only marginally below current vision models in other cases. Through extensive studies of scaling, the authors were able to show two clear patterns:

Instead of pre-preparing patches and then computing linear projections, one can use a ResNetv2[3,20] to extract features after the 3rd convolution block and then project them into the input dimensions of the transformer and perform the learning. This is exciting as it means, that we do not have to depend on these patches.

These patches, according to me, seem to be a heuristic and raise questions:

When using Hybrid ViTs, the authors observe that they perform better at smaller computation budgets, which provides a direction for re-incorporating the "inductive bias" back into the model and also probable un-scaling to smaller datasets. The difference, however, is non-existent at larger datasets and computational budgets.

The authors wanted to understand what the model is capable of learning. So they studied three finer aspects of the model.

The authors also try to duplicate experiments similar to BERT[7], where they try a masked patch prediction (MPM) for self-supervision. With this approach, they were able to outperform vanilla training from scratch, but are still ways off from supervised pre-training. This opens up several avenues for future exploration:

The authors do not address contrastive pre-training [23,24] and leave this exploration for future work. This is also both exciting and worrying and leaves the following questions in mind:

They show that at the cost of compute, we can increase performance. The compute is increased because of more layers replacing the original one and an increase in the dimension of inputs, despite being of smaller sequence length. Axial-ViT opens up new directions for incorporating existing attention style blocks[11] in the architecture and diversifying further.

The authors did something that the language community has been doing for some time.

Throw enough data at a large enough expressive model, something should come out of it eventually.

ViT performs well when you give it large datasets such as JFT-300M, ImageNet-21K. But simple datasets such as CIFAR10 and CIFAR100 do not work out of the box. It shows that given enough priors in data, one can essentially force a transformer to learn anything and bypass the biases which we encode into CNNs. But this model raises more questions than it answers them:

Them Numbers be Shocking

Let's finally talk about what it takes to get these models ticking. A dataset the size of 300M images and approximately 1B labels, for starters. But that is not all. In one of the tables in the paper, the authors do a comparison of the compute budget

The TPU Pricing gives an interesting insight into what it might take one to train a model using Google Cloud. Let's break the above model down:

Let's do a common GPU to TPU break down to give some more context.

Note: These numbers are from personal experience and some underlying assumptions. I am also not assuming a state of art set up with Mellanox chips, gigabit internet connections, latest GPU configurations, etc. in this, which will help boost results.

All these questions and training regime expenses, makes me wonder: What are we gaining by solving the Top-1 Accuracy of ImageNet? Are we making AI more general or just badly overfitting on a single dataset? Can we get rid of inductive biases and just let data priors take over?

Or maybe, just maybe, we get lucky and a synergy happens. We find inductive biases that work well and let data priors handle its failures.

I think the authors have done a fantastic job of coming up with an idea at the intersection of language and vision, paving way for an exciting new research direction.

An initial implementation in Pytorch is available here.